Join us on Thursday, September 21st!

Location:
The DHS Records Center is located at 200 East Hill Street, Oklahoma City, OK 73105. It is on the corner of Hill Street and Walnut. It is about ½ mile west of Lincoln Blvd., or about ½ mile east of Santa Fe. It is located in a white warehouse building. The sign in front of building reads, Decorative Arts, not Department of Human Services. There is a building parking lot just east of the main door, facing Hill Street and a small area off the street west of the building facing Walnut.

Lunch ($10 Membership Registration):
Lunch will be provided by Kamp’s 1910 Café! Due to the fact that this is not a catered lunch, we have reduced the lunch price for this meeting to $10.00.

**Please choose either a ham & cheese or turkey & cheese sandwich if requesting lunch. Box lunches come with a sandwich, bag of chips and a cookie!

RSVP online by clicking on the following link: https://tinyurl.com/yar8q39s


In 2009, the Department of Human Services (DHS) Records Center was established in a 10,000 square foot warehouse located on N. Stiles Ave., in Oklahoma City. In 2014, structural concerns to the building, as well as space limitations, triggered a facility move process. In 2016, the Records Center moved into a 41,000 square foot warehouse located on East Hill Street. Interested in learning what occurred between March 2014 and February 2016, involving our building search, scope creep, and move? Then attend the September 21, 2017, ARMA-OKC Chapter meeting and Tour of the DHS Records Center!!!
Speaker:
Presented by Mary Gail Foster, DHS Records Management Administrator. Mary Gail Foster serves as the Records Management Administrator for the OklahomaDepartment of Human Ser-vices. She graduated from the University of Central Oklahoma in 1969, with a BA in Sociology; she received a Master’s in Library Science degree in 1977, from the University of Oklahoma; and became a Certified Records Manager in 2005. Ms. Foster began working for the Oklahoma Department of Human Services in 1975 as a Library Technician, was promoted to Librarian in 1977, then became the agency’s Records Management Administrator in 2006. For the first 17 years of her employment, she was unaware of the agency’s Records Management Program. In 1992, she was appointed the Agency’s Records Coordinator when a former employee resigned. The program has evolved from an “other duties as assigned” task to a full time position. 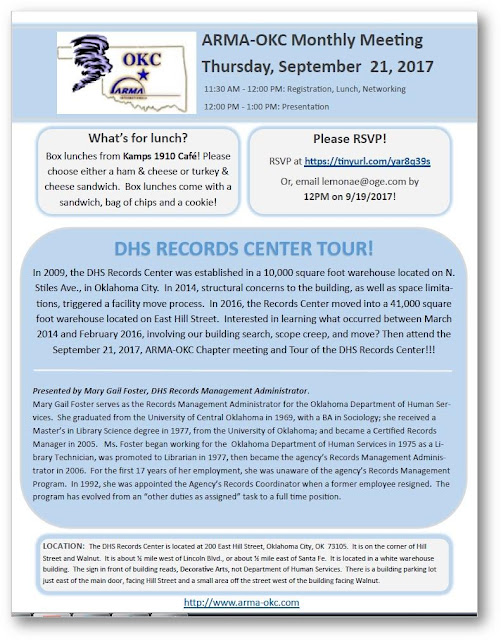 Join us on LinkedIn!